A company called Ampro Computers (bought by ADLINK in 2008) produced a well-known series of single-board computers called the Little Board, starting in the early 1980s. Their first offering was the Little Board Z80, which is similar to the Ferguson Big Board, but sized to mount to 5.25” floppy drives (the Big Board mounted to an 8” drive) and using a serial console instead of the Big Board’s video console. Ampro eventually switched to PC compatible Little Board systems, and had several competitors that used the same form factor.

I was aware of the Little Boards through industrial control work, mostly encountering the later PC/104 systems. I’d read about Saundby’s Ampro Little Board system and had been casually looking for one. A bare Little Board would’ve gone nicely in an old SCSI external disk box, but Ampro also made their own chassis, the Series 100.

In fall 2017, Gene Buckle contacted me about building up a custom S-100 system for him. While discussing possible trades, I mentioned being interested in one of the Ampro Little Board systems he’d posted about on the VCFed Forums. Turns out that neither of them were working, and he was willing to trade both for the customized S-100 system! Both of Gene’s boards were packaged in the Series 100 chassis, making for a very nice trade.

The first Series 100 I worked on was in a bit of rough shape. The chassis had many scratches and rust spots, someone had apparently glued a block-off over the B: drive opening, the power supply was very dead, and the Little Board Z80 was not working, either. It was, however, a Little Board Z80 Plus system, which means it has SCSI! The chassis was stripped down for rework. Unfortunately, it seems I did not take pictures of the overall condition pre-repair. Here’s a rusty section on the divider that the power supply and Little Board mount to: 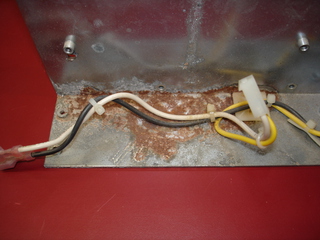 It looked like something had been leaking down the chassis. There’s a pretty decent chance it was electrolyte from one or more capacitors in the power supply section. The rust on the chassis and divider were removed with a wire wheel, washed, and then painted: 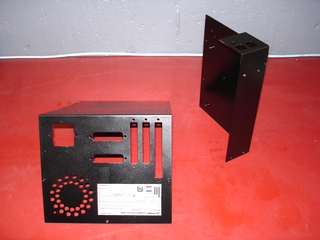 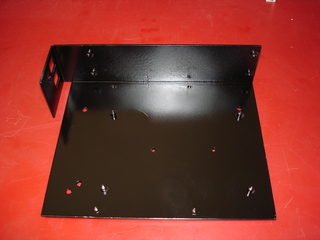 The data sticker on the back had been masked off with tape before painting. Careful with cleaning: the lettering started to smear a little when I got too close with isopropyl alcohol! A keen observer will note there are extra holes in the divider. I’m not sure why these holes exist, they were poorly drilled, out of round, and had massive burrs on them. Nothing was mounted to them when I acquired this Series 100. The switches and LED were reinstalled: 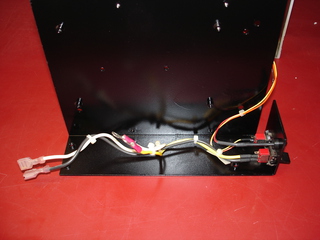 The bottom portion of the chassis was reassembled in preparation for reassembly: 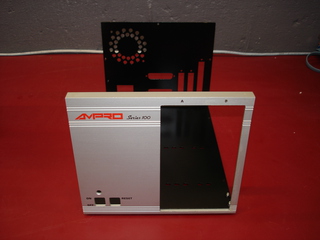 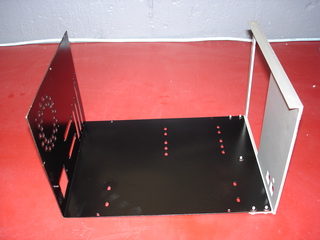 The glue from the B: drive block-off and some other marks were carefully removed from the aluminum extrusion that forms the front. A tiny bit of the B: drive lettering came off with the glue, but the front cleaned up nicely.

The power supply in this Series 100 was an Aztec open unit, basically a bare circuit board that mounted on one side of the chassis divider. It did not work, I believe Gene had told me it blew fuses. It also seemed to be missing at least one capacitor: 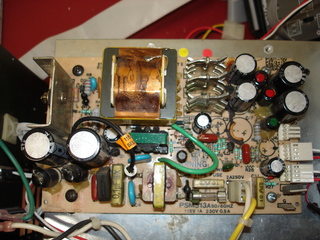 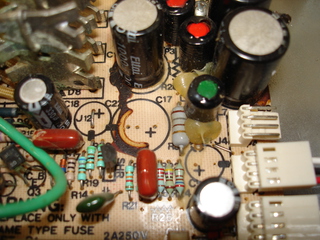 As seen, there are also some RIFA capacitors which would’ve needed replacing. The supply is not auto-sensing, requiring a jumper to choose between 120V and 240V. Overall, not a great supply. Rather than repair it, I decided to replace with a Mean-Well RD-50A. This supply provides 5V at 6A, and 12V at 2A – more than adequate for the Little Board and two 5.25” floppy drives. It’s also auto-sensing, and installs nicely in the space for the old PSU: 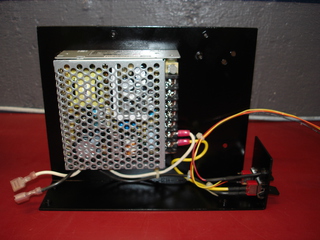 Being enclosed, the Mean-Well module also offers better protection against accidental shorts and shocks. I put some polyimide tape over the M3 screws that secure it to the chassis, to prevent any shorts against the Little Board: 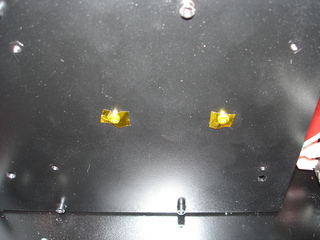 New wiring was made to power the Little Board and drives, as the original wiring was pretty hacked up: 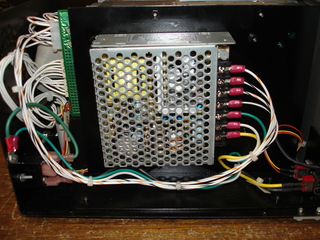 A pretty nice fit in this little system! The Mean-Well supply fits between the standoffs for the original power supply circuit board. This would allow one to switch back to the Aztec supply, if for some reason that was actually desirable. I can’t see any reason for that, though.

Little Board Repair and Reassembly

The Little Board Z80 Plus did not sign on with known good boot media or Ampro’s ROM monitor. There was no activity from the RS-232 transmit lines. This turned out to be a relatively simple fix: the DC to DC converter which supplies -12V for the RS-232 level shifters had died. The converter is the black ELPAC/TDK module with the silver label in the upper-right corner of the following picture: 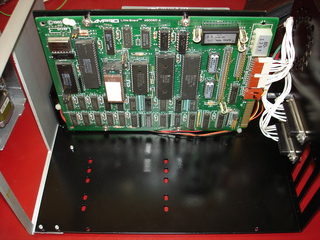 These modules were readily and cheaply available online. I purchased a couple spares, in case either system has a converter failure in the future. With the Little Board repaired, the 5.25” drives were cleaned and the system reassembled: 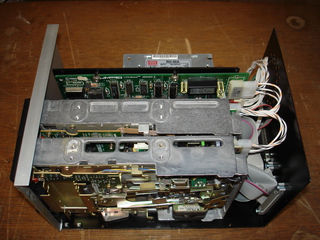 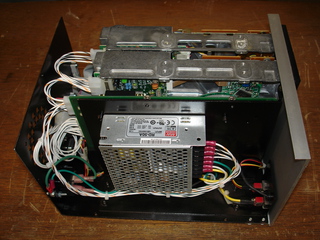 These floppy drives are not original to the system – they came with it from Gene, but the originals would’ve been pushbutton eject. They have to mount “upside down” in the chassis to get the power wiring to line up. This required making a custom floppy data cable, as a twist is required, and the original was too short.

The Mean-Well power supply’s data label remains readable when installed in this position: 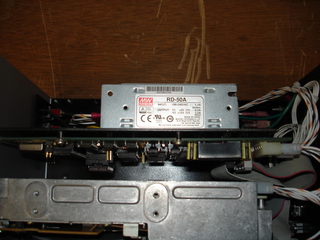 New cables for the parallel and SCSI ports were also made. The male chassis mount IDC connectors are still available, though a bit expensive. The #4-40 screws I used were a bit long, though it makes no difference in this application: 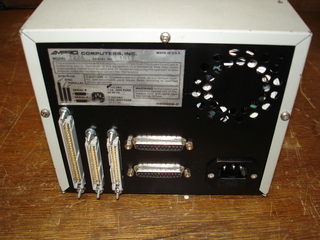 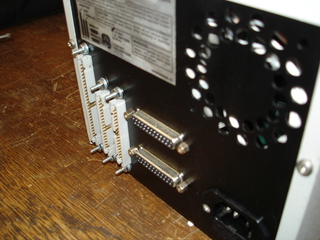 The system was now all put together and ready for use: 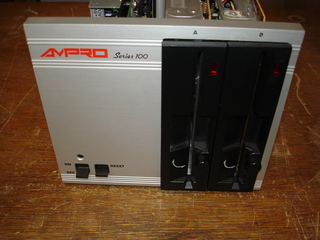 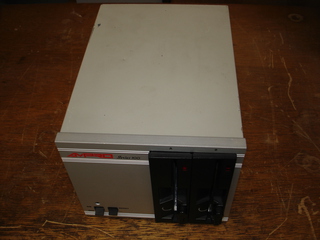 A good looking, compact Z80 system! Time to find some software to run on it…

Running CP/M on the Little Board Z80

This system was of course intended to run CP/M from the start. Gene had provided several diskettes with the system, and has Don Maslin’s images available online. These images can be written out with ImageDisk, which can convert the TeleDisk TD0 files Don Maslin generated.

The system of course comes right up from diskette: 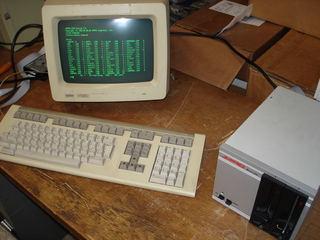 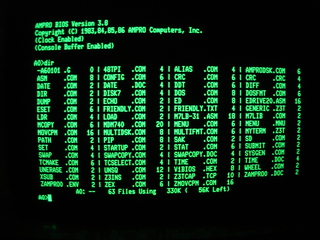 You get ZCPR from the start, along with format interchange programs, file transfer software, and other useful utilities. Disk images for SCSI disk formatting and configuration are also available, though I have not personally tried to use SCSI on this system yet.

Note that CP/M reports (Clock Enabled) – there’s a Dallas no-slot clock adapter installed under the system EPROM. This device provides a “phantom real-time clock,” which is activated with a handshake sequence that is unlikely to ever appear in normal data. My Dallas module is of course dead (the batteries are supposed to last around 10 years), and I haven’t done a replacement module for this one yet.